We’re nearly halfway through 2019…already?! How did that happen? All the more reason to take a look back at where, when, why, and what we got up to in 2018 as we prepare ourselves, hopefully, for another successful summer show season!

We start our 2018 journey back in April at the Food & Drink Expo at the NEC, Birmingham.

The Food and Drink Expo 2018 was, as always, a successful event for discovering up and coming food market trends, industry networking and new product launches. This year, the show welcomed visitors and exhibitors from around the UK, Europe and beyond, all flocking to the popular collective of food shows in search of new and exciting tasty products. 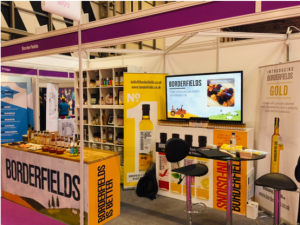 Borderfields saw the Food & Drink Expo 2018 as a fantastic opportunity to introduce the new range of calorie-controlled sprays infusions. 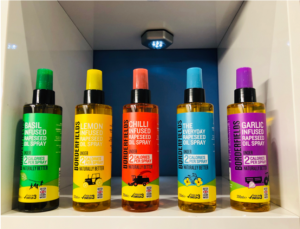 The response from the show visitors was very positive with particular taste preference on the garlic, chilli and lemon infused sprays in particular. Some valuable points generated from the popular feedback was the bright coloured branding and colour-coded design coinciding with the infusions flavour. Consumers in particular agreed they would be more attracted to this product where browsing retailer shelves.

We met a wide mix of national and international buyers who were interested in the Borderfields range and the health benefits that cold pressed rapeseed oil boasts over competing oils such as olive, coconut and sunflower oils. We made valuable contacts with both large and small retailers with the hope of generating some exciting new trade relationships and nationwide stockists.

Heading in to the summer months, we launched a really exciting campaign in partnership with Race for Life including a ‘pretty in pink’ makeover of our 500ml Rapeseed oil bottles!

At Borderfields we are very proud of raising money to support life-saving charitable research and furthering the reach of cold-pressed rapeseed oil as a healthier option. From August to September 2018 we partnered with Race for Life raising money for Cancer Research UK by donating 30p from every joint-branded 500ml cold pressed rapeseed oil bottle hoping to raise £10,000 for the charity. 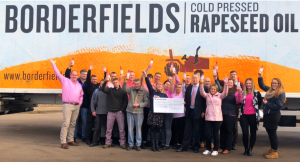 Leading up to the campaign, we worked very closely with Race for Life to come up with a joint branded design for the bottle which would be both visually appearing and eye catching on the shelves – we believe the bright pink cap and matching branded tray tick all the boxes!

Both British and Scottish rapeseed oil traditional 500ml bottles were given a label make over and hit the supermarket shelves in August 2018 with quite an impact seeing sales rocket! The campaign and bottle were well received by both retailers and consumers who were eager to support by raising awareness of the fantastic work the charity do and raising money by stocking our co-branded Borderfields bottle.

The campaign drew to a close at the end of September with the total raised smashing beyond the £10,000 target. We presented a cheque for £12,636.00 to Race for Life (Cancer Research UK) in February 2019 where we celebrated with all our staff by wearing lots of pink!

An annual favourite is the Festival of Food & Drink at Clumber Park, Nottinghamshire. A lively outdoor event celebrating all things foodie from celebrity chef cooking demonstrations and food sampling to farmers market shopping and full-basket-bargaining.

As harvest season draws to a close and the summer begins to fade in to a cold, crisp autumn, the Festival of Food & Drink at Clumber Park, Nottinghamshire always strives to celebrate the Best of British once again by drawing in exhibitors and visitors from all over the Midlands and beyond. 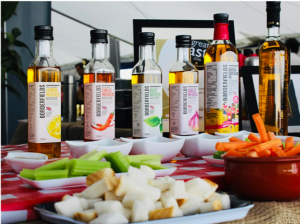 Borderfields set up in prime position in the main exhibition marquee for the duration of the two-day festival showcasing an array of bright coloured oil, infusions and sauces for visitors to both try and buy! The very popular infused oils were attracting attention and generating a spark for controversial discussion – particularly over our chocolate, chilli infused gluten-free brownies!

The full Borderfields Range was on display, including the limited-time co-branded Race for Life X Borderfields 500ml cold pressed rapeseed oil bottle. We also trialled our newly-launched spray infusions which proved very popular with consumers; particularly those looking to maintain a calorie-controlled diet without sacrificing flavour. Our most popular infusions tended to be the bold flavoured chilli and garlic oils which cook up a storm in a selection of our recommended recipes. Another favourite is the Borderfields Gold, our premium cold pressed rapeseed oil which is filtered 5 times to create a smooth blend out of a uniquely nutty rapeseed variety.

As always, the festival attracts and invites a collective of high-profile chefs and culinary experts, some of which payed a visit to the Borderfields stand specifically to explore the range of the healthier and natural cold pressed British rapeseed oil.

Jane Devonshire, published cookbook author and MasterChef winner 2016, is a proud user of Borderfields oils and infusions range. Jane ‘loves the quality of natural cold pressed and its surrounding health benefits being half the saturated fat of olive oil, high in vitamin E and having a rare near-perfect balance of Omegas 3, 6 and 9. 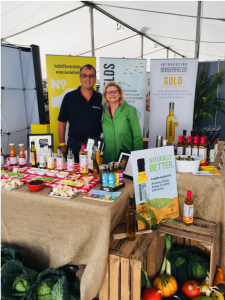 We thoroughly enjoyed the festival once again, with great responses from both taste-testing visitors and celebrity chefs who used the Borderfields oil in cooking demonstrations. We hope to be back again in 2019 for another fantastic festival showcasing more of our ever-expanding oils and infusions product range.

As the summer draws to a close, and the crisp autumn begins to set in, we like to round-off our events season with a traditional old-favourite; the Southwell Minster Bramley Apple Festival. 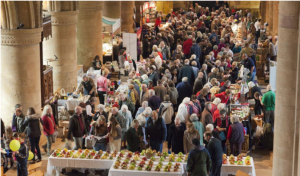 Borderfields were invited to feature with the food and drink stalls inside the Minster offering the full range of cold pressed rapeseed oil and infusions to local customers and businesses, some already familiar with the brand.

The range of infused oils proved to be popular with garlic and chilli infused being the two most sold items of the day, narrowly followed by the premium Borderfields Gold oil which is 5 times filtered and sold exclusively to smaller retailers, farm shops and delis.

For those looking for gifts and some early Christmas shopping, the infused oil gift packs were received well by customers who wanted the opportunity to try all the oils without the added expense.

It was an enjoyable day and Borderfields were very flattered to feel a valued member of the local community.

Well, 2018 really has been an adventurous year! We hope to continue the hard work and excitement throughout 2019 with new product launches, new opportunities and new distribution channels…watch this space!