Louise Ridley, a Nottinghamshire NHS worker, entered the competition to win a hamper of rapeseed oil products and BHF goodies via the Borderfields Facebook page.

Shocked yet excited, competition winner Louise said “I am really grateful to have won this fantastic hamper as I now get the chance to try some of the newly launched products including the flavoured infusions and calorie-controlled sprays.” 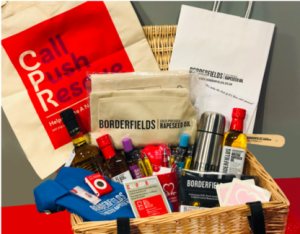 Louise continues, “The British Heart Foundation is a charity I endeavour to support and raise awareness about where possible as close friends of mine have experienced a variety of heart conditions which the BHF funds life-saving research in to. At work, I wear my BHF badge with pride to increase awareness of the charity and the fantastic work it does.”

To celebrate the partnership and raise vital funds for the BHF, Borderfields launched their-jointly branded bottle in February 2019 to be sold across supermarkets in England and Scotland. More than 7 million people are living with heart and circulatory diseases in the UK today. That’s why Borderfields are working hard to support the partnership by donating 10p from every ‘red-top’ co-branded bottle to secure their target of £50,000 which will help to fund the charity’s life-saving research.

Simon Gillespie, Chief Executive at the BHF said “Heart and circulatory diseases kill around 170,000 people each year in the UK – that’s one person every three minutes. The BHF urgently need to fund more research to help end heartbreak and save lives.”

Director at Borderfields, Paul Davenport adds “We are hoping to promote the switch from saturated fats, like butter, lard and palm oil and coconut oil, to unsaturated fats, like rapeseed oil, which can help to lower the non-HDL, or ‘bad’ cholesterol that is linked to an increased risk of heart and circulatory diseases.”

Keep an eye out for new up and coming competitions for your chance to win some BHF and Borderfields prizes. Explore more heart-healthy recipes on the British Heart Foundation webpage. To keep track of how much of the £50,000 target has been raised so far, you can find out more via the Borderfields website.