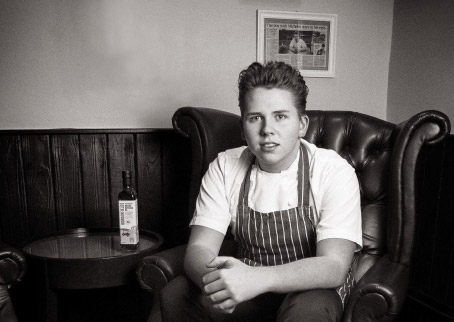 As Britain’s Youngest Head Chef, Luke Thomas started to make a name for himself early in life – and he hasn’t stopped over the years! It all started with the launch of Luke’s Dining Room in Marlow, Berkshire in 2012 and he’s been busy ever since – competing for Wales in the 2013 series of BBC2’s ‘Great British Menu’, opening Luke’s Eating House & Gin Rickey’s Bar in Chester in 2014, publishing his first cookbook – Luke’s Cookbook – which received glowing reviews, and introducing Retro Feasts to Dubai in 2015.

Throughout his career, Luke has taken residence at some of the top restaurants in the world, including Jamie Oliver’s Barbecoa and three Michelin-starred restaurants such as Alinea in Chicago.

Travelling and learning about food from top international chefs is an on-going aspiration for Luke, who also enjoys meeting food suppliers and producers to gain insight into seasonal ingredients, all with the aim of fine-tuning his own culinary style.

“I think the quality and flavour of Borderfields is very good and I’ve never been a big fan of cooking with olive oil,” explains Luke. “I use rapeseed oil mostly for salad dressings and preparing food. I add a tablespoon to one of the lamb dishes I cook in my restaurant and it really helps to finish it and freshen the flavour.”

But it’s not just the fantastic taste that has Luke raving about Borderfields. The fact that it’s healthy and British is also very important for him.

“There’s obviously many health benefits that come with using rapeseed oil – it’s got good levels of essentials oils and vitamin E. I try to source as much local produce as possible, so using rapeseed grown in Britain helps with that as well. “People are a lot more health conscious now and my restaurant is the sort of place you can nip in and out of, rather than only visiting for a big occasion,” he continues. “This means I have to be much more careful with things like the salt and saturated fat content in my food, and Borderfields helps me achieve that.”